A cold wet Tuesday night in Plymouth against Blackpool, again. After seeing all but one game this season, I’ve seen some terrible football being played but in the games I’ve seen we’ve played good in some just lacking the right result. MK came to Home Park at the weekend and won, poor defending and decisions of the referee lost the game and yesterday night’s game was much of the same. Argyle conceded within 2 minutes of the kick off, a deflected goal which beat Luke at his near post, not a great start but so far this season, early goals conceded seems to be a trait of the Greens this season. Argyle had very little chances in the first half against a well drilled Blackpool side who looked threatening every time they ran at the Argyle defence.

A lackluster first half with Plymouth Argyle 1-0 down in a rain swept Home Park, things were not looking good. 10 minutes in the second half, Argyle coming out a lot better than the first half with a few chances. They got their reward in the 49th minute when Sonny Bradley headed in to equalize. The last goals scored for Argyle at Home Park was at the start of the season against Charlton in a 2-0 win, seems a long time ago now. The Greens created more chances after the goal in search for another, Blackpool having some chances of their own. Things looked to have got better but in the 65th minute center-back Ryan Edwards was sent off for a second bookable offense, the 3rd red card in a row at HP this season. Adams really needs to get our discipline sorted, it’s absolutely killing us.

In the 70th minute, Blackpool captain Jimmy Ryan drove a 20 yarder to Lukes’ bottom right in front of the travelling 100 or so Seasiders to put B’pool 2-1 up. A good finish but how he was allowed to run with the ball for so long without a challenge being made, questions over the defending again. The red card had really killed Argyle’s momentum, if anything, Blackpool would score again and they did in the 86th minute when Nathan Delfouneso hit a long distance which skid off the surface and past Luke for 3-1 and it was really game over then. A glimmer of hope for Plymouth towards the end when the stadium reacted to what I thought was a penalty given in the Demport end. Referee gave an indirect free kick for a pass back to Pools’ keeper Allsop, with the whole Blackpool squad lined up on the goal line with Jake Jervis lining up the shot, it went straight into the wall and hoofed away. Argyle had a late penalty shout turned down by the referee in Orange this evening. It wasn’t to be Argyle’s night and the game finished 1-3 to Blackpool, their 4th win of the season – with Argyle slumping to a 4th defeat and 3 red cards in the process. 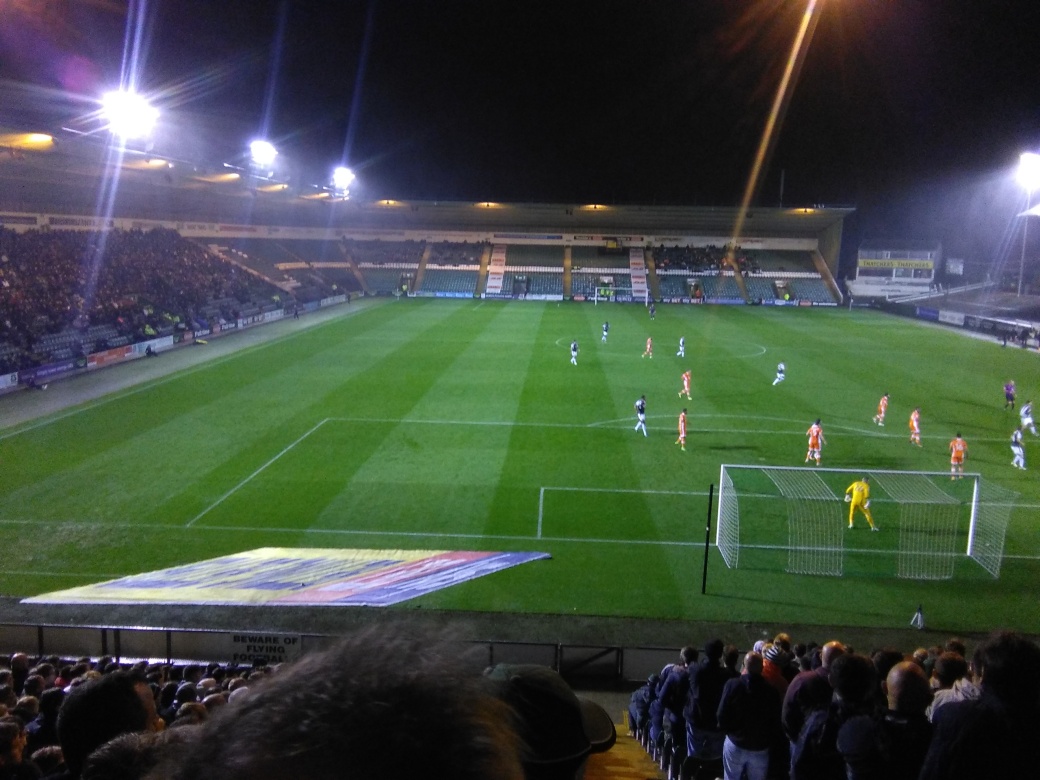 Something is clearly not right at Argyle at the moment, people keep going on about the playing budget, people must realize that we could have all the money in the world but we are still the most southern professional football team in the country, so getting players to come here is difficult even before a wage. It’s not always about the money, Adams recruited the best he could before the season started. There are question marks on how much was given to Adams to spend, but we don’t know anything about how much was given. We’ll still be fine this season, we were always going to get results like last night, it’s a long old season ahead and I think we’ll stay up. If anyone thought we would coast through League 1 need a reality check. We are an average team on a low playing budget, mainly consisting on free transfers. What we want is stability financially, staying up in League 1 will be a huge achievement in which we need to more stable financially – we don’t want to drop back where we came from. Fans must have patience unfortunately, there are too many games not played to start calling for DA to be sacked. No the football isn’t good, the results aren’t much better but KEEP THE FAITH, believe in the manager and players – they will get it right. Last night’s performance wasn’t pretty but we can build on it, as I say there are a lot of games to be played yet so please stop being an idiot by calling for Adam’s and the board to go, we’ve been in a lot worse or have people already forgotten?